“We are there to entertain and put a smile on your face.”

Those are the words of a senior executive at one of the UK’s largest media conglomerates during an interview by The Guardian in 2009.

I would like you to accompany me on a short journey:

It’s a Sunday morning and having indulged in a little lay-in, I go into the kitchen to put the kettle on and make myself a cup of tea. Whilst the kettle boils, I switch the radio on and I am instantly transported to a wonderful place as the sound of Chopin floats into my ears. As the music fades I am greeted by the soothing and calm voice of the presenter, who introduces the next piece, Marquez Conga Del Fuego, an uplifting number full of Latin passion and oozing positive energy from every note. I feel alive and bursting with a deep feeling of peace and everything’s all right in the world.

The news is next; the newsreader launches into an assault of all my senses with tales of murder, violence, extinction, war, financial ruin and natural disasters. At this point you could be forgiven for thinking so what? Those are the headlines for that particular hour and there are bound to be different news in the next hour and so on… Sadly this theme continues throughout the day without abate.

Someone at the radio station HQ has to make the decision as to which headlines to include in the next bulletin. Someone at a higher level has to decide the overall editorial policy.   I am intrigued to know the reasoning behind these decisions. Test it out for yourself. Switch on the radio for the hourly news and what do you hear? If you’ve switched onto a mainstream radio broadcaster, you’ll hear up to six stories which have been selected by experienced and respected news editors where the overwhelming focus appears to be on the most damaging elements of human behaviour and activity across the world. By nature of this conscious choice by news editors, listeners are infected with news of pain and suffering for up to two minutes, leaving us experiencing negative and unresolved feelings of sadness, anger and depression and remaining uninformed about the root causes of the issues we hear. Where is the balance? Where is the equal focus on the positive news stories which we know are happening too? What will it take for radio and TV news editors to make the conscious choice to focus as much energy on selecting stories which showcase the very best of human behaviour and of people and organisations who are actively taking action to make the World a better place?

What effect do you think this diet of bad news is having on the mental wellbeing of the old, the sick, the depressed and the mentally ill and young people from deprived areas with little or no hope of a better life? Do you think this is responsible broadcasting? Do you think listeners need to hear about an attempted murder by an individual who needs to remain anonymous because of his age? 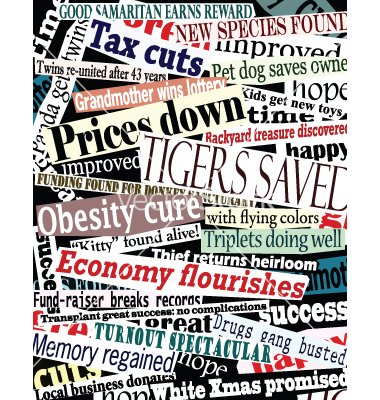 Consider the alternative: Positive stories of people, companies, organisations and governments doing good things; positive outcomes in the face of adversity; solutions rather than problems; hope rather than despair; humour rather than gloom.  Using positive language to describe negative news.

How about letting listeners decide what type of news content they want to hear? How about introducing short bursts of positive stories (no longer than 2 minutes) two or three times every hour on some stations?

Positive stories, by the way, do not have to be good news, they can be related to bad news but from a positive perspective, for example by reporting on good initiatives which resulted after a disaster or violent event, stories of human compassion and selfless acts which are happening right now.

Thank you for taking the time to accompany me on this short journey, and I truly hope some of the elements I have touched upon will be useful to you, and I very much look forward to hearing a revival of mainstream news reporting which focusses on positive stories and solution-based journalism.