Why does the Government feel the need to frack when Balcombe is already showing it is possible to have clean energy in every community? 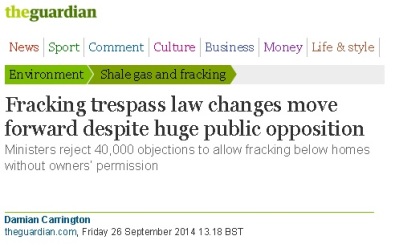 y 21st September, during People’s Climate March, 670,000 people around the World marched to ask world leaders to take the necessary steps to move us towards a 100% clean energy future. So why is it just five days later, that the Department for Energy and Climate Change has announced that it is removing people’s rights to object to fracking beneath their properties?

Friends of the Earth Senior Campaigner Jane Thomas said: “With 99% of the respondents opposing the Government’s plans to allow fracking under people’s homes without their permission – it is clear that this was a sham consultation.

“This Government seems hell-bent on fracking irrespective of widespread opposition. You’d think with a general election approaching politicians would listen to public opinion and get behind the popular energy solutions of cutting waste and backing renewables. “Fracking for more fossil fuels will cause more pollution and bring about more catastrophic climate change – the Government should stop making things easier for the frackers and allow people a say in what happens beneath their property.”

Throughout this blog series which we started on September 1st, we have continued to showcase millions of voices from concerned citizens worldwide who not only want renewable clean energy but they are also implementing clean energy projects across the UK and the world.

No better example of this is REPOWERBalcombe which was born of the inspiring belief that communities can take responsibility for their own energy supply and that this can be done in a way that is clean and sympathetic to the environment.

Last year Balcombe found itself defending its village from the onslaught of fracking, one year on, together as a community, they are now showing us all just what is possible when a community decides to create its own energy from renewables.

Listen here to my interview with Joe Nixon, communications director for Repower Balcombe.

If the Government won’t listen to the people then as a nation we have to show through our peaceful, yet assertive actions that renewable energy in every community is the way forward. Balcombe has set the precedent that all communities can now follow.

Now is the time for EVERY community in the UK to look within at our own energy resources, group together and secure our own clean energy future for generations to come.  If we put our money where our values are and stop buying dirty fossil fuels, the government and energy companies will have to start taking a closer look at renewable energy, and that would be a positive way forward.